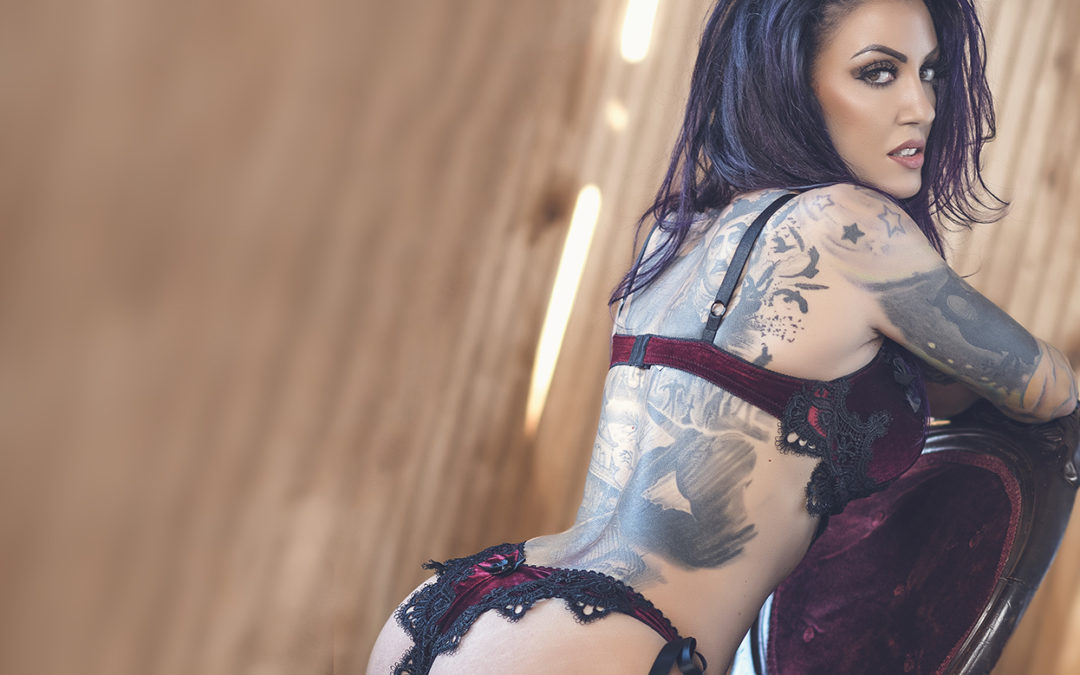 Tell us, how would you describe yourself in a few sentences?
I would have to say I’m an extremely ambitious person. I’ve been professionally modeling since 1999, a singer for two cover bands (performing 3 times a month), and a full time cosmetologist for 23 years. I also was diagnosed with breast cancer in May 2019, had a double mastectomy in August, and reconstruction in November. I didn’t let it stop me from any of the aforementioned.  I have a lot of goals so I keep trying to hit them no matter what cards I’ve been dealt 🙂

What inspired you to get into tattoo modeling?

After a certain age, main stream fashion modeling isn’t an option anymore. However one of the things I love about Alt modeling is there is no timeline. If you take care of yourself, you can keep going. It’s one of  the most accepting modeling styles out there. No judgment about height, size, shape, hair, tattoos or piercings. It’s awesome 🙂 So having to stay “normal” for years to get work, I was able to be the real me and get the tattoos I always wanted and still be able to model 🙂

What type of photo shoots you like doing the most?

High fashion with full styling and gowns. It’s not a common theme these days, so it’s refreshing to see pop up in the feed now and again. I’m really hoping the stigma of tattoos in the fashion world eventually doesn’t matter. Over seas they seem to be a bit more open to it, but the USA still has issues with large pieces, but I get it. They feel it’s distracting if you are modeling clothes. It may become the main focus, versus what you are wearing. 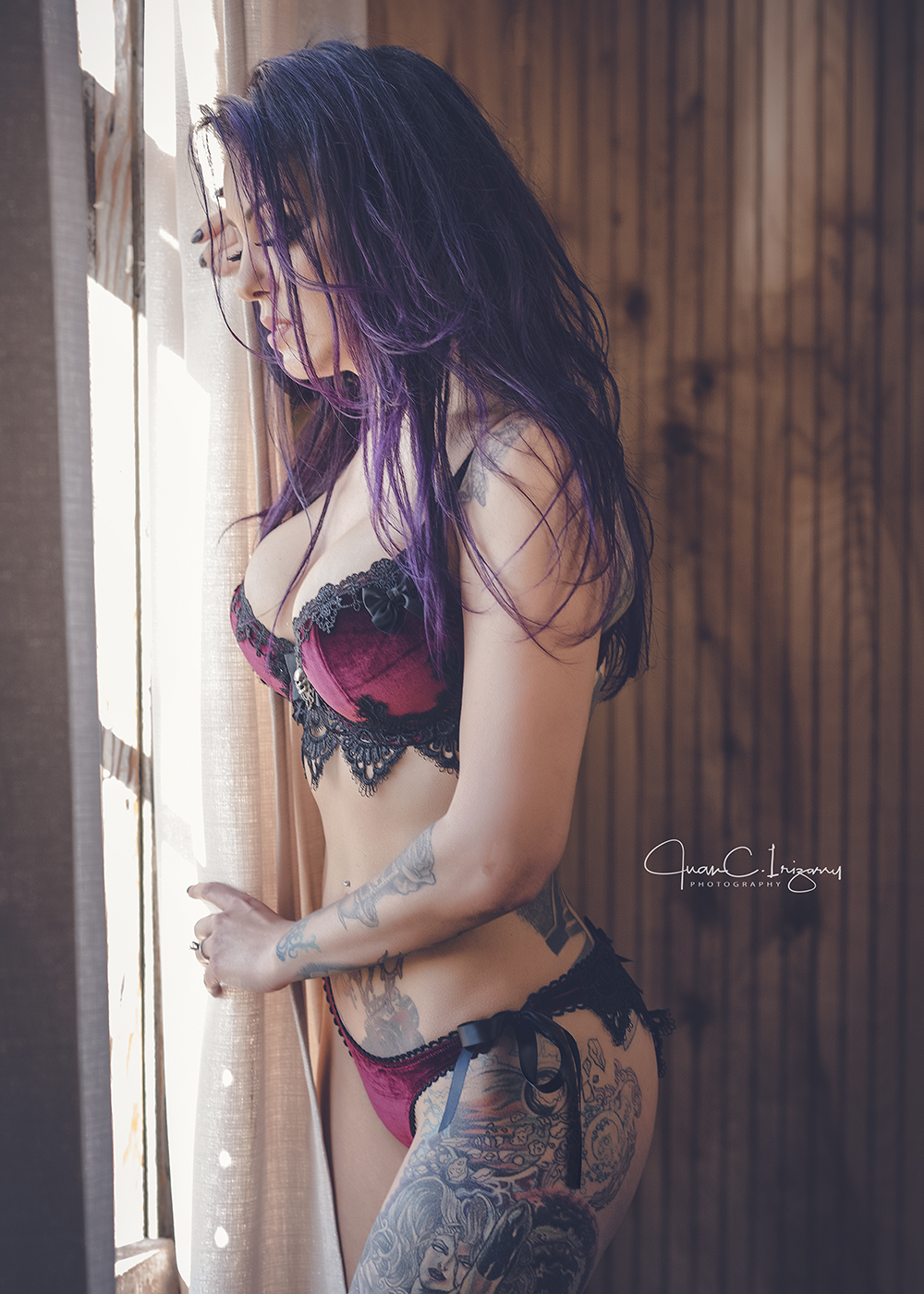 What is the weirdest experience you’ve had either at a photoshoot, convention etc?
I was working a shootout for about 8 photographers and one of them was taking all of his images on his iPhone. I was like…… ooooookay? Whatever, haaha, I was paid for my time so he could have used a Fischer Price camera and I would have still given him his money’s worth lol
Sex appeal is a big part of the industry, Brands look for you to attract the sexual or erotic interests of other people to help sales, build brand recognition etc.  When do you feel sexiest?
There’s nothing like a good quality set of lingerie and fun shoes or boots. I have quite the collection of footwear, like most women, lol but I looove to wear fun high boots 🙂 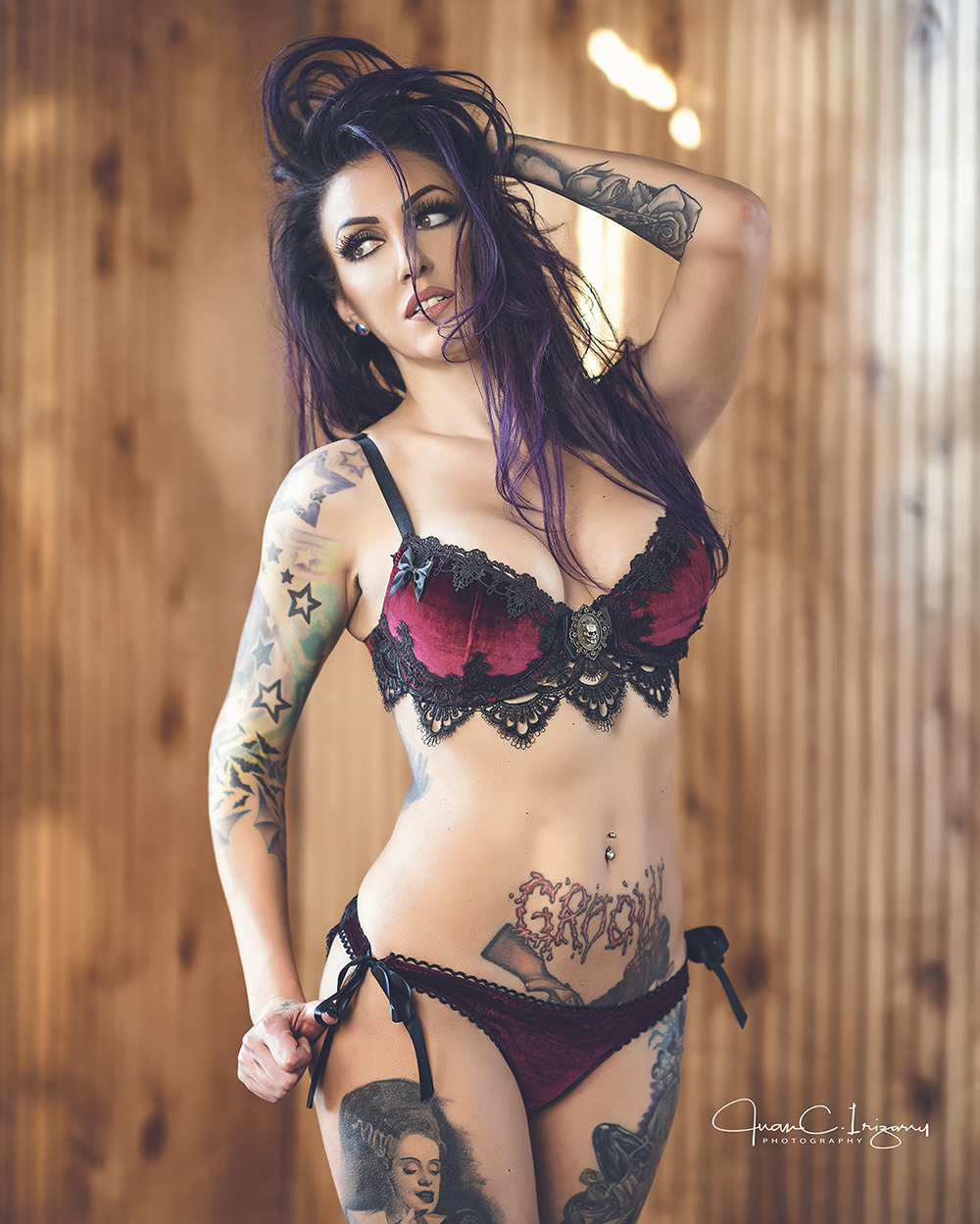 What do you like to do when you’re not modeling?
Hitting some new bars and restaurants in the city.
What’s your favorite tattoo and why?

I really do love them all, but I would have to say my backpiece because my artist Mike Oliver and I were so dedicated to getting it finished. I had standing monthly appointments for a whole year and several 4-7 hour sittings. It was well worth it, and Mike still wants to get into it and add more detail 🙂

If you could get tattooed by anyone, who would it be and why?
Paul Acker . Majority of my tattoos are horror based and he is one of the best at what he does. 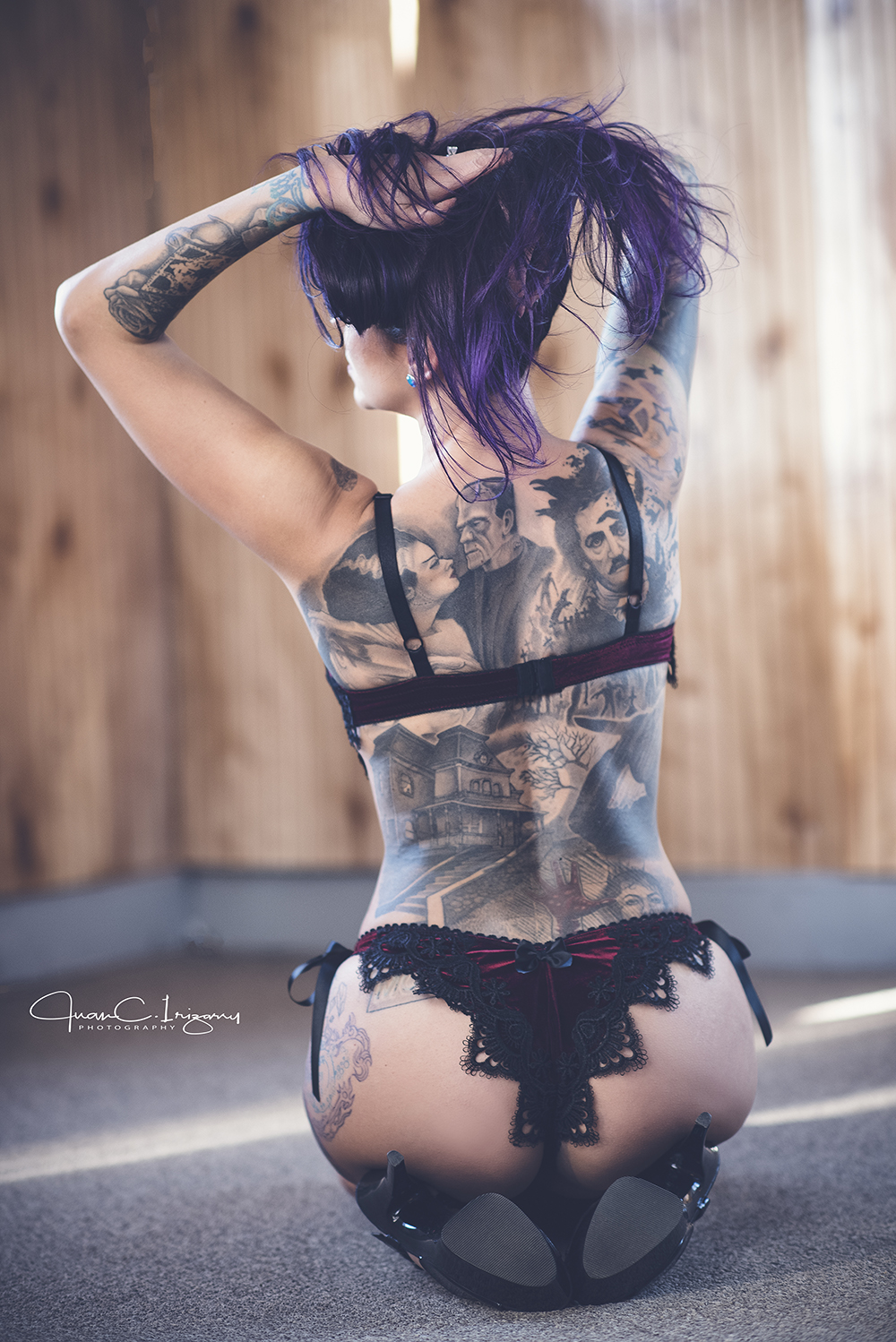 Finish this sentence: If I could rule the world for a day I would…

Have a personal jet fly me to all of the places I want to see. Not sure 1 day is enough time but I’ll cram in what I can lol
So we know models have a lot of “fans” and receive a lot of attention, both online and in-person, some wanted and some definitely not. What’s the worst pick-up line you’ve ever heard?
Ugh this one tattoo convention , this guy said he wanted to take me for a ride on his Harley. I responded politely with “oh yeah?”  And he proceeded to further elaborate on how I would be in front of him but facing him blah blah blah,  and I felt like that Homer Simpson meme where he backs away into a hedge and disappears. Ew.
Top Three songs on your playlist?
I have 3 bands I always put on a playlist if that counts lol
Nine inch nails
Type o negative
Faith no more 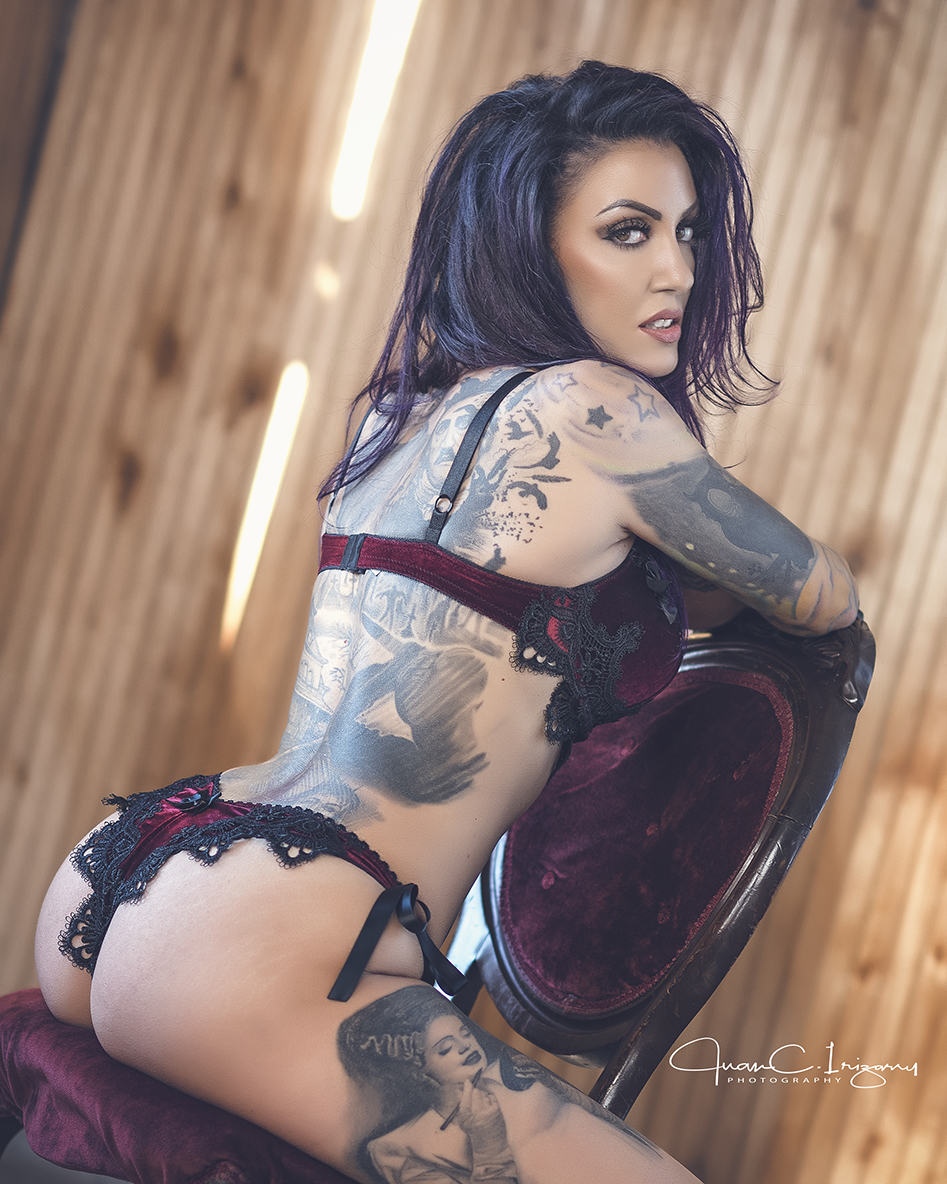 Tell us where to find you online and anything else you want us to know!
My Instagram is @Farrah_Demorte , I have a webstore  www.farrahdemorte.com  where I sell prints and calendars and such. Twitter: RockAngelFarrah , and Facebook fan page Farrah De Morte. Thanks so much for giving me your time! Xoxoxo
Photos by Juan Irizzary